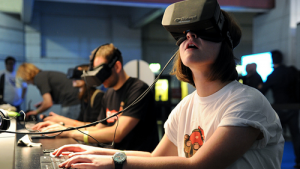 The domain of virtual reality or VR is a tough nut to crack, no matter from which side this problem (and opportunity) is approached. As many of those who have been following the world of this particular technology know really well, the VR tech has been hovering near the point of a breakthrough for almost two decades.

At the same time, at least two distinctive technologies have been developed and presented to the public as the complete solution which will finally bridge all the problematic gaps. Each one of these gaps has been a source of issues and difficulties for the VR development community, no matter if the problem is based upon some elements of the hardware setup, software or the mix of the two.

However, now there is a new tech that has already changed the world and it comes in the form of blockchain. Today, millions use it for accessing cryptocurrencies like bitcoin which can be used to gamble online, purchase goods or services and do many other things, but there are plenty more alternatives to its applications.

Naturally, many of these applications fit well with other technologies and industries, ranging from established ones to emerging markets. This is the reason why, from many quarters of the development community, there are calls for merging the VR tech with some aspect of blockchain that would finally bring it home in terms of the final market breakthrough.

A bit of history is needed to understand the process of the overall development related to the virtual reality technology. In its essence, the tech represents the quest for the visual representation of the 3D environment, complete with an authentic perception of depth.

Today, while the technology to render images in 3D has existed for almost four decades, the actual 3D VR setting remains somewhat elusive. This is odd mainly because devices, mostly in the form of headsets, have been presented by tech companies since the early 1990’s which have claimed to have unlocked the VR domain for the public.

Every time, however, in spite of the tech demos that the same companies presented, the actual driving technology has not managed to transform itself into a fully-defined end-product. Instead, these devices lingered on for some time, mainly thanks to the endless enthusiasm and hopefulness of the VR community, after which they became passages in tech history.

The key for the actual representation of 3D images on a 2D surface truly has been unlocked many years ago. By projecting an image in stereo, meaning in different ways for each of the user’s eyes, the tech can mimic the way we distinguish depth in general and provide the sense of space. This works for anyone who has ever tried any kind of a VR headset.

However, the problem that is a huge issue for a big percentage of users is the issue of nausea or motion sickness. The same occurs because the brain and the body are in conflict about what is going on – while the user’s inner ear tells them they are sitting down, their eyes are saying to them they are moving. Commercially, this could be a disaster for anyone who buys such a device and ends up being sick from it.

New generations of VR devices are trying actively to find a way around the problem, but so far, no silver bullet has been found. Chances are that the solution will come as a mixture of small improvements, not a big and radical change in the root technology of VR.

But, even today for most, the sickness subsides completely after some time spent using the device, but investors in general see this as a deal-breaker for VR, which is otherwise perceived as a risk-prone field. This is why finding funding and investment opportunities have always been a big challenge for the VR developers. But now, it appears the blockchain tech, mainly its ICOs procedures, could change this in a manner that could make development a lot more feasible prospect.

Decentraland is a VR project that has been created using blockchain technology. It recently managed to raise more than $26 million using ETH in its ICO or initial coin offering. The project describes itself as a process of creating a virtual world in which the blockchain tech is used to as a registry for plots of land (digital plots, in this case).

The ICO brought to the company over 86,000 ETH and reached its pre-set hard cap in about 60 minutes. The speed in which this occurred reminded many of the ICO of the Brave browser, but which ended in less than a minute. At the same time, the ICO process remains the focal point for any grievances in the FinTech community, even though the month of July 2017 saw over $500 million raised through this particular funding model.

For Decentraland, this is a great opportunity to generate both funding and attention to their venture, which will most certainly demand a lot of public engagement to become successful. While the fortunes of the company and the project are by no means set with this ICO, they show that out-of-the-box thinking is the way forward for the VR community.

The blockchain domain provides two distinctive options of the VR developer. The first one comes in the form of the FinTech application, where cryptocurrencies could act as a means of funding and/or monetization. The nature of digital currencies shows the users to be already friendly to new technologies, so it is safe to assume that many would also be receptive to the VR devices.

Of course, not every VR project has the means or needs for the blockchain tech. However, most of them could apply it somehow and with great success. Today, with yet another focus on the VR apparently passing by, no company in this field can provide itself with the luxury of ignoring potential aids in their quest to both bring virtual reality to the public and make a profit doing it.