The development of the cryptocurrency gained a number of groundbreaking feats in 2015, but at the same time faced unfavorable instances. Despite these, Bitcoin still stands strong and is ready to take on another year.

But what exactly awaits the Bitcoin transition to 2016? Will this year be a more fulfilling one for the cryptocurrency or will it serve as another round of obstacles before Bitcoin reaches mainstream adoption?

Even during the earlier months of 2015, Bitcoin showed a steadfast run toward the mainstream as several businesses began adopting the Bitcoin technology.

Various industries in the conventional market, including food, travel, e-Gifts, and online gaming, have grown interests in integrating Bitcoin into their businesses.

In the iGaming sector alone, it witnessed the rise of multi-currency casinos, combining the benefits of adding Bitcoin payments on board with the stable system of fiat currencies. This year, it can be expected that more operators will follow this trend as Bitcoin becomes a more established payment option in online gaming. 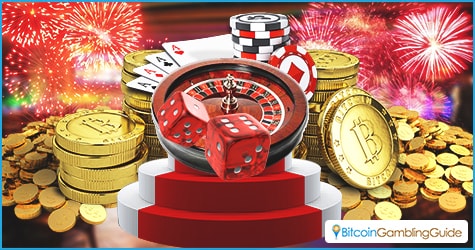 Likewise, Bitcoin casino software and game developers will gain more ground in the next months as the demand for Bitcoin-powered games rises. Most notable is the popularity of the top Bitcoin slots of 2015 extending this year and will be joined by new releases from the premium game content providers.

Moving on to the Bitcoin ecosystem, various reports exhibited that the population of Bitcoin users significantly grew last year. But the most significant sign that Bitcoin is maintaining its encouraging phase is its price.

The Bitcoin price, notwithstanding its volatility, obtained the impressive $400 price tag toward the last quarter and remained trading above that mark for the longest time since its sudden price drop earlier last year. The increasing number of Bitcoin transactions is seen as one of the primary factors behind its optimistic price movement.

This year, the Bitcoin price will likely continue on a positive track, especially with the strengthened Bitcoin remittances and the block reward halving by the third quarter.

Using these achievements as bases, Bitcoin acknowledgement is certain to be amplified due to number of Bitcoin events, such as the widely celebrated CoinFest 2016, the Innovate Finance Global Summit, and the Inside Bitcoin series that will take place in key locations like New York and Hong Kong, are already scheduled for the next months.

These events and developments further solidify Bitcoin’s fate in finding more success this year, but it still needs to brave highly probable challenges that will deter it from reaching its goals. 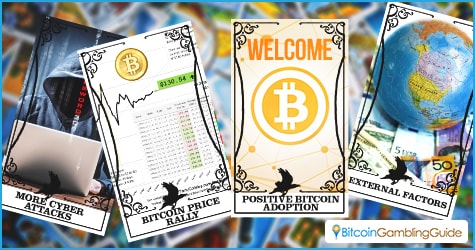 Bitcoin hurdles are yet to be eliminated

Although 2015 was a goldmine of achievements for the Bitcoin industry, this giveaway is not without a number of unfortunate events.

Few of the most noteworthy events that dealt a detrimental blow to the cryptocurrency progress are the rise of DDoS attacks and the intervention of external money conduits, particularly central banks.

Based on recent evaluations, computer and tech experts have concluded that DDoS attacks will not fall in the numbers even all throughout 2016.

The finding that the iGaming industry, including the Bitcoin gambling market, will take the highest casualty rate from such cyberattacks makes matters worse. After all, Bitcoin gambling in 2015 witnessed a series of cyber threats that put both consumers and operators at risk.

Moreover, a number of Bitcoin-dedicated companies and startups have received unwarranted judgment given by the central banks of Australia and Africa due to their involvement with the cryptocurrency.

Considering these recent setbacks, it is best for the Bitcoin ecosystem to brace for another wave of detrimental events to come next year, specifically those that involve financial institutions.

Nevertheless, the Bitcoin community can hold on to the fact that they are capable of overcoming future hurdles since they have made it through 2015, despite the presence of these hindrances. Year 2016, after all, could be the year of Bitcoin.