This year’s Wimbledon has been a rollercoaster ride. First, there was the Cinderella story of Marcus Willis as the 772nd ranked tennis player managed to perform well enough to get matched with the world’s number three, Roger Federer. He may have been defeated but his feel-good story brought the tournament a lot of positive PR.

The second big event was when Novak Djokovic, the world’s number one, was defeated. This resulted in his elimination from the tournament. This surprising loss also comes from an unexpected source, the American Sam Querrey, ranked 41st in the world. A lot of people were expecting for Djokovic to get another Grand Slam win but this put paid to those ideas.

With one giant down, many were thinking another was to follow. Serena Williams may have been favored by many sportsbooks to win the tournament, but a lot of analysts were focused on her recent defeat and performance. 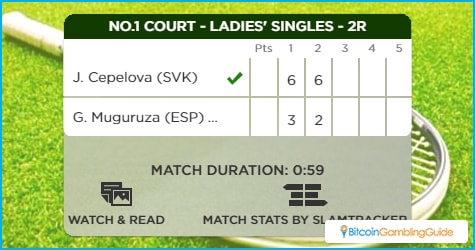 Williams failed to win the French Open and has been noticeably looking under the weather with all of the pressure on her. However, it seemed that pressure was what she needed to bloom. Last Monday, Williams managed to prove the doubters wrong as she managed to defeat another of the favorites, Svetlana Kuznetsova. In a game that saw her serving 14 aces and 43 winners, Williams showed off why she is the world’s number one.

On the other end of the spectrum is Garbine Muguruza. Pegged as an up-and-comer by many, she was seen as one of the potential winners of the tournament. The 22-year old was the winner of the French Open, which earned her a Grand Slam, and was even the one to deny Williams of the top spot on clay.

Furthermore, she is currently ranked second in the world. However, that potential seemed far off in her match with Jana Cepelova. Performing well-below expectations, Muguruza seemed tired and unfocused. After the match, she blamed her condition on over-practice for the tournament, with promises to learn from her mistakes. No matter the reasons, though, this has resulted in an upset in the odds, especially when she came in second to Williams in last year’s Wimbledon.

Odds for the next part

With the knockout round over, the Women’s Single division of Wimbledon moves to the quarterfinals. Eight women managed to enter the quarterfinals and they will be having their matches today. Odds have already been posted on the matchups on sportsbooks like Anonibet. 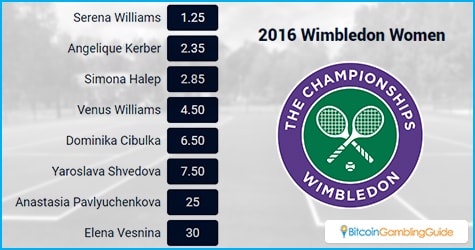 Williams will face Anastasia Pavlyuchenkova, with Williams being the overwhelming favorite at 1.07 to 6.75. Williams’ sister Venus has her own match with Yaroslava Shvedova at a more even 1.55 to 2.3. Simona Halep and Angelique Kerber will also have a match along with Dominika Cibulkova and Elena Vesnina.

The winners of these matches will move on to the semifinals. A lot of people are still betting on Serena Williams as the last woman standing, but Angelique Kerber is the next top favorite. It remains to be seen if Williams can continue delivering her brand of tennis to reach the top spot.