Dota 2 fans and sports betting enthusiasts were treated to a spectacle over the weekend as The International 2016 Dota 2 Championships set the stage for the grand final battle between Wings Gaming and Digital Chaos.

TI6 as it is commonly known, the sixth international Dota 2 tournament was a favorite in Bitcoin eSports, having been covered by several sports betting sites, including BetBaller, One Hash, SportsBet.io, and Nitrogen Sports.

Starting with the Wild Card on Aug. 2 and moving on to the Group Stage from Aug. 3 to Aug. 5 before setting the stage for the six-day Main Event, TI6 witnessed all 16 teams from across the world showcase their skills and strategies to emerge as the victors in every match-up. 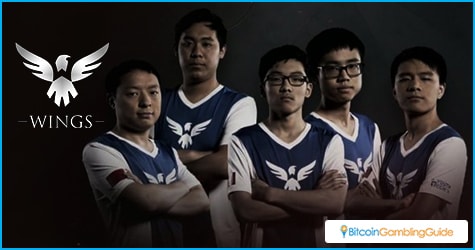 The Chinese team, Wings Gaming, played against the team many consider to be the underdog in a best-of-five match, which declared Wings Gaming as this year’s champions with a 3 to 1 scorecard.

After what seemed to be a three-week tournament, Wings Gaming took the Aegis of Champions, along with the $9.1 million grand prize.

The pro gaming team from China took home the lion’s share. But with a $20.7 million prize pool, the participating teams already got themselves a handful. When converted to Bitcoin’s current price as of writing, Wings Gaming received almost 16,000 BTC of the 36,000 BTC prize pool.

TI6 registered the largest prize pool in the history of the Dota 2 Championships, and this was in part of the additional contributions generated from the 2016 Dota 2 Battle Pass sales.

To show how huge the grand prize is for this eSports tournament, Wings Gaming received more than the prize money won by Chris Froome in Tour de France, by Manchester United in the FA Cup, and by Andy Murray and Serena Williams in the Wimbledon.

This goes to show how huge the eSports industry has become, and this is reason enough for the gaming industry to take notice of it. eSports in the online betting scene, however, is not new, and the Bitcoin gambling sector even has built quite a formidable niche for it. 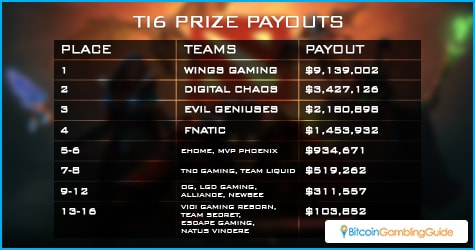 Bitcoin sportsbooks and eSports betting sites religiously followed TI6, among many other eSports tournaments this year. In fact, UltraPlay-powered sports betting sites featured competitive odds for this tournament, which saw almost equal odds for Wings Gaming and Evil Geniuses when they battled for the Upper Bracket finals.

Those who placed their bets on popular teams like OG and Team Liquid, however, were surprised to learn that their bets lost early on during the Main Event. This shook up the brackets and even the online eSports betting scene as the players who wagered on the underdogs ended up getting the profits.

With the TI6 already done, Bitcoin eSports fans can set their eyes for the other eSports tournaments that are currently covered or will soon be taking place.