MoneyPot takes a different approach to gambling with Bitcoin. It is based on a unique concept and encourages playing against other bettors who want to make the most of their luck. Although its status may still be far from that of the popular Bitcoin gambling websites, it marks a good beginning for a new project. 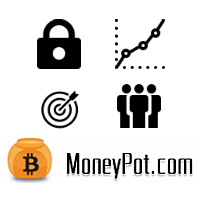 A brainchild of a developer, who is behind websites like BitUndo and Bitcoin Vigil, MoneyPot is an interesting gambling platform that is wholly based on chance. Thus, the payouts that can be won for every bet solely depend on how lucky you are for that round.

The game involves a basic line graph that increases rapidly until it reaches a point where it crashes. The higher the amount jumps, the bigger the pot that can be won. The catch here, though, is that you must cashout before the amount crashes since failure to do so results in the loss of the bet.

Instead of the typical games where you have absolutely no control of, the game on this website lets you take the driver seat for a short time. Like what the website says, this game is 99% based on luck; 1% based on skill. Therefore, your skill in clicking the cashout button as quickly as possible plays an integral role in the overall process.

It would not be surprising, however, if new players will get confused the first time around, given that this is a totally fresh concept in the world of Bitcoin gambling. Once the game has been experienced, though, everything seems to unravel, gaining the ability to clearly what the real point of playing this game is.

While this is not exactly the kind of game that may appeal to Bitcoin casino bettors, it has a certain level of excitement that borders on the game’s risky nature. That is why it can be assumed that risky online players may find MoneyPot more than interesting.

With such risks involved, it is absolutely advantageous that this game accepts Bitcoin in bits only or one millionth of a bitcoin. In this way, there is not too much to lose when luck slams its doors on you. However, it must be known that this platform offers four tables that each have a minimum amount of bet that can be placed.

The Fun!  And Casual tables require the least amount of bets at 1 bit and 100 bits, respectively. The Players table, however, sets its limit at 10,000 bits while the Serious Business table, as the name implies, is dead serious about the game with 1,000,000 bits needed in order to play.

In the event you have not enough bits to wager, this website offers 2 bits for free every hour. With this amount, it is already possible to try out the game in the Fun! table.

Meanwhile, both depositing and withdrawing bits require confirmations, so waiting for a few minutes or hours must be expected. In fact, deposits may take 15 minutes to an hour before they get processed while small cash outs are delivered instantly. Large withdrawals, however, may take less than two hours on a good day; otherwise, it may take a day to finish the manual process.

While MoneyPot may seem bland at first glance, it actually offers a thrilling experience, especially to first-time players. What makes it all the more appealing is that it is provably fair. However, it would be better if will become mobile friendly and undergo a design makeover since it looks to be a great way to kill time.