The first thing you need to understand is the concept of position. Position is your location at the poker tables relative to the dealer button. It will determine the types of hands you play and how you will proceed past the flop. Here’s a poker seating chart that defines most positions at the table. 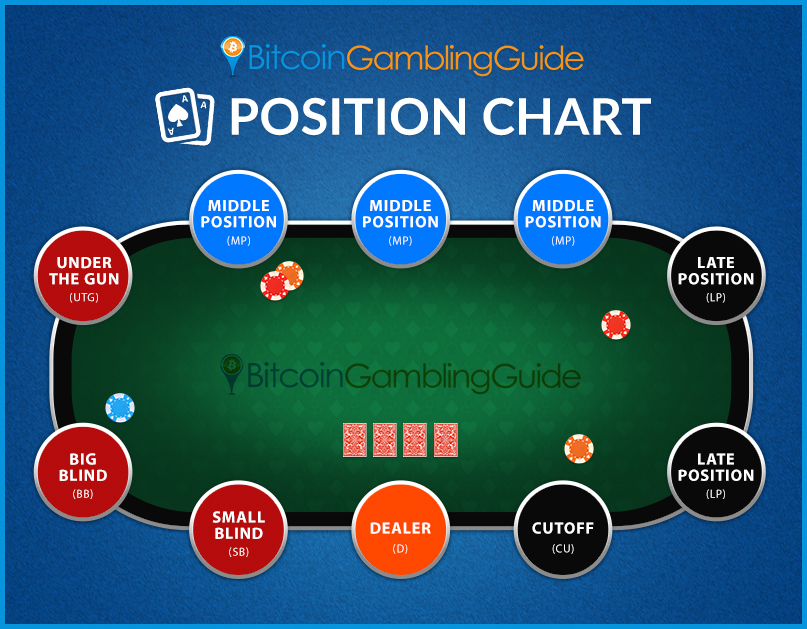 As you notice from the poker position chart, there are three primary positions at the poker table: early position, middle position, and late position. Early position consists of the blinds sb and bb and the first players after the blinds, also known as “under the gun” or UTG. Next is middle position, which is the three players left of the big blind. The final spots at the table are considered late position. The latest position at the table is the button. Let’s take a quick look at the positions in poker and how to approach them.

Early Position – Early position players will be the first players to act after the flop and until showdown. As such, these players need stronger hands to come into a pot.

Middle Position – These players get to see early position players act first but still have to contend with any late position players left to act. Starting hands do not have to be as strong in middle position, but you can’t play complete garbage.

Late Position – The best spots at the table as you get to see most of the table act before you. Here is where you can open up the range of hands you play.

Button – The final position at the table. The players sitting on the button will get to see all other players act before them. You can open with the broadest range of hands from late position.

Now that we’ve covered position let’s talk about starting hands. The better the starting hand, the better your odds of winning. Some hands are going to be playable from any position. These include big pocket pairs like aces, kings, or queens. You can also play A-K and A-Q suited from all positions.

Hands like middle pairs, big suited aces, and suited face cards are hands that can be played a bit more in mid or late position. On all other hands, you need to consider your position. Below is a chart that breaks down non-pair hands and whether you should play them. 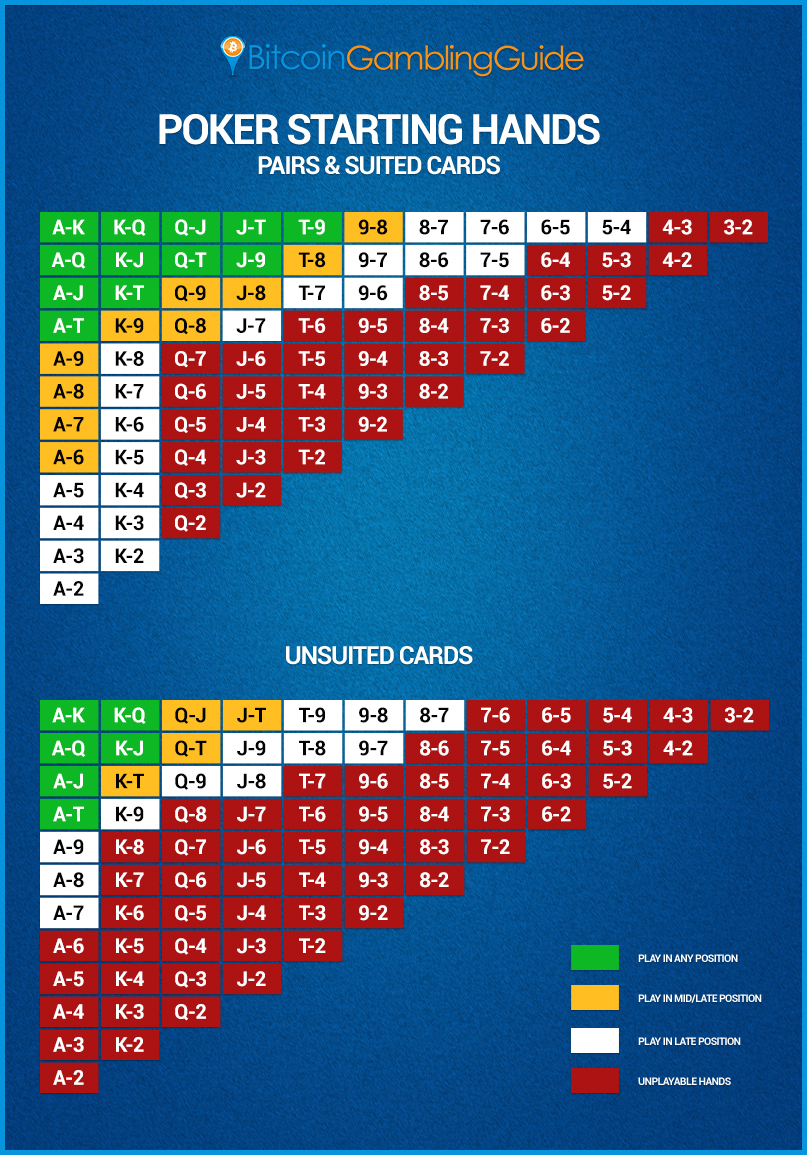 Ideally, you should only play with strong hands in the early position, good hands in middle position, and play more speculative cards in late position. Position players who master starting hands relative to position are much more successful than standard players.

The general rule of thumb in poker is that aggressive poker is winning poker. However, that doesn’t mean that there isn’t a time where you should play more passively. Let’s look at both styles of play.

Passive play is considered more of a conservative or nitty style of play. Passive players will often not take the initiative in most hands unless they have a big holding. They generally do a lot of calling pre-flop and may call down hands on the flop and beyond. They will only bet when they have it, making them very predictable.

There are times where you will want to use both styles. Generally, you will want to play more of an aggressive type of poker to build chips and control the poker tables’ action. However, if you have poker players that are playing overly aggressive or playing too many hands, you can play more passively and trap them when you pick up big holdings.

Poker is not just about playing your cards but also playing your opponents. You can gain a lot of information about hands based on how players act, how they bet, and sometimes how they are dressed. When you sit down to a poker table, the first thing you need to do is to start sizing up your opponents. Think of yourself as a poker profiler. You’re trying to decipher the type of strategy a player is employing.

You can start by looking at how they are dressed. Do they dress nice, or are they sloppy? A nicely dressed player may be more of a passive or conservative player. Those dressing poorly may be more on the aggressive side. Did they bring a backpack to the table? This person spends a lot of time at the poker tables and is likely an aspiring pro. Many little things that have nothing to do with the game can help you profile your players.

Then there’s the game itself. Pay attention to how the player bets, how they handle their cards, and how much they talk. Do they talk more when they are ahead in a hand? Do they bet less when behind and more when ahead? You can form a picture of a player’s strategy from observation.

Knowing this, you can work on establishing what’s known as table image at the poker table. Your image is what others perceive to be your style of play. If you are not playing a lot of hands and only showing down monsters, you will be considered a tight player. Those who are playing multiple hands per round are looser. Once you establish your image, you can use this to try and influence the game. If you’ve been playing tight, you can start running a few more bluffs. You can start betting your big hands even more aggressively and get action from players that think you’re hyper-aggressive.

Poker tournaments require more aggression and shifting of strategies than cash games. The object of tournaments is to acquire all of the chips in play. You generally cannot rebuy into a tournament, and even tournaments that offer reentry will become freezeouts at some point. This often requires that players adjust their style of play according to the table conditions and the stage of the tournament.

Players that can regularly adjust their play will excel more in poker tournaments. Passive players will generally have difficulty consistently making the final table because they don’t build enough chips to stay competitive. Often, they have to get very lucky to make it deep.

Cash games are a bit different. In a cash game, you are playing against the same group of people for extended periods. Your object is to win as much money as you can until you either bust, quit, or the game breaks. Your strategy is based on the players at the table, and you can often dictate your table image. Aggressive poker players will generally win more than passive players, but a passive strategy can work in the right situations.

In cash games, you will see players come into pots with more speculative hands than in tournaments. You’ll also see them draw more often., even if they shouldn’t. You can always rebuy into a cash game. You can’t do that in a tournament.

Mix Up Your Betting

An essential element of Bitcoin poker strategy is how you bet. There are a couple of schools of thought regarding how you bet at the poker table. The first is that you should stick to a static betting strategy and not deviate from it. This strategy dictates that you make the same types of raises pre-flop and make post flop bets based on a set percentage of the pot.

This strategy is solid if you don’t want players to guess your holdings. If you bet the same amount holding air as you would with a full house, it will keep your opponents guessing. However, it will become too enticing for some players to try and playback at you.

An alternative strategy is to regularly mix up how you bet your hands. For example, if you flop a set in one hand, you make a continuation bet of 25 percent of the pot. Other times, you make a pot size bet. And yet another time, you may check the hand. When you vary your bets, it keeps players truly guessing what you have and makes your play much harder to decipher.

Poker is not a game that can be mastered in just a few minutes or even a few days. It takes months, and even years of hard work, study, and playing online poker to become proficient at the game. For those just starting out, worry about mastering playable poker hands and other basic and intermediate skills. You can do this by picking a premier Bitcoin poker room to start practicing your new skills.

Next, check out the bonuses. Do you get a much larger bonus for depositing with Bitcoin over a bank account? Are there online promotions that reward you for your loyalty? Do they offer a player rewards program? Sites that offer generous promotions generally have better traffic than those that don’t.

Does the poker site only accept Bitcoin, or do they also accept Altcoin deposits? Some sites are affiliated with Bitcoin exchanges, where you can purchase crypto for use on the site. Finally, how is their support? Do they have live chat support, or is support limited to email only? If you can’t get help when you need it, why play there?

After you get some experience playing poker, consider taking steps to improve your Bitcoin poker strategy. That includes signing up at a poker training site or even hiring a coach. There are many sites online that will help you improve your game for free or for a fee. Regardless of the path you choose, keep learning. The more you learn and adapt your game, the longer you will last in poker.

Learn how to play video poker with Bitcoin

Learn how to play texas holdem with Bitcoin

Yes. While both are poker, online poker is a faster-paced game and is much more mathematical. Basic poker strategy for live poker will often not work as well for online poker and vice versa. Many strategy concepts will carry over, but you will need to develop new skills to win.

Absolutely. Bluffing is key to any advanced poker strategy. If you don’t bluff, odds are you will not be a consistent winner. Including bluffing as part of your online poker strategy will increase your profits, especially in online poker tournaments.

Yes. Poker tournament strategy is different from cash game strategy. In poker tournaments, the object is to take chips from all other players. This requires a different poker strategy and mindset than for cash games.

The best Bitcoin poker strategy is usually a loose aggressive strategy. You’ll play more hands aggressively and keep your opponents on their toes. However, make sure you can adjust your poker strategy as conditions change at the table.