What Types of Poker Tournaments are Played with Bitcoin?

The most common form of poker tournament offered at Bitcoin poker sites are multi-table tournaments (MTT). What happens when you play in MTTs is that you’re given a stack of chips upon placing a buy-in fee. The object of the game is to win all of the other chips in the tournament. With solid poker strategy—and a bit of luck too—you’ll make your way to the money and ultimately the final table where you have a chance to win the top prize.

Generally, Bitcoin poker tournaments pay out the top 10 to 15% of a field. The best payouts are at the final table, with the top 3 players winning the most money. The winner of an MTT will get somewhere around 30% of the prize pool. Texas Holdem is the most common form of poker tournament offered. However, there are tournaments out there for PL Omaha, Omaha HI-Lo, and mixed poker games like 8-Game.

There are also Jackpot Sit & Go tournaments where you only have to defeat two players to collect a Winner Takes All prize. The prize is randomly generated and has the potential for a jackpot payout. Some sites have awarded jackpots of $1 million in these events. 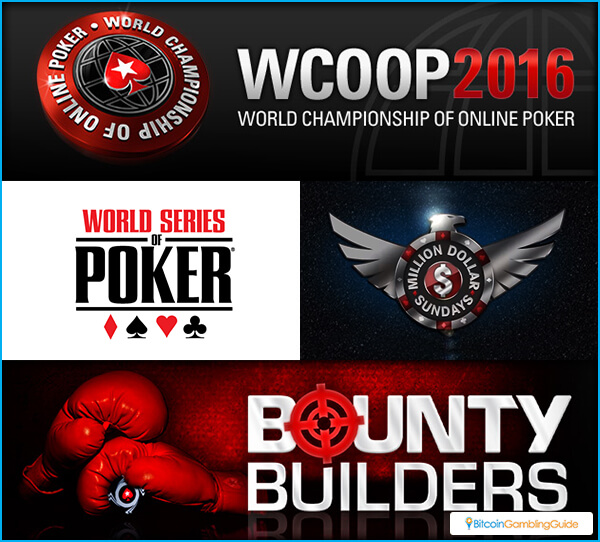 Satellite tournaments are simply an ordinary poker tournament. But instead of having pot money at stake, the prize is the buy-in to another tournament that offers a much larger prize pool. Think of the annual World Series of Poker. Several online poker sites usually hold satellite tournaments that grant seats to the WSOP Main Event. The same goes for the other major poker events, whether online or offline.

If you’re a patron of the top Bitcoin poker sites like Americas Cardroom, then you’ve seen multiple satellite promotions ran by the site.

These kinds of tournaments have one main feature that gets more players hooked: a massive guaranteed prize pool. These events are held once a week and have a fixed-guarantee. Often, these events exceed their guarantees. Bitcoin poker rooms like Americas Cardroom and BetOnline Poker both offer weekly guaranteed tournaments.

Bounty tournaments are similar to your standard poker tournament, but every player has a special prize attached. If you knock out a player, you get the bounty for that player. For example, let’s say that Ignition Poker has a bounty tournament with $10 bounties. Every player you knock out will award you with $10. You get this payout regardless of where you finish in the tournament. Some players make more in bounties than they do in prize money, especially at the lower cash tiers.

Turbo tournaments, as the name suggests, offer a fast-paced poker action that requires quick decision-making skills and strategies to knock out other players. These tournaments have shorter levels and usually smaller starting stacks. There are turbo tournaments and hyper-turbo tournaments for those that don’t want to sit around waiting for hours to win.

Some online poker sites now offer fast fold versions of poker tournaments. Used initially for poker cash games, some sites provide fast fold tournaments that allow you to immediately start playing a new hand once you fold. The tournament plays in a fast fold format until the final table, where the event turns into a standard Sit & Go format.

How to Play Bitcoin Poker Tournaments

If you want to play Bitcoin poker tournaments, you need to find a quality Bitcoin poker room. Check out our section on Bitcoin Poker for the best sites to play BTC poker. Our reviews cover everything from how to register for an account to customer service.

Note that not all Bitcoin poker sites and online casinos are true BTC sites. Some allow you to deposit using Bitcoin, Bitcoin Cash, and other cryptocurrencies but convert the money to fiat. However, one advantage to these sites is that you can often deposit with credit cards or fiat and then use Bitcoin for cashing out.

After signing up for an account, go to the Cashier and click Deposit. Select Bitcoin, and the site will give you an address to send your Bitcoin to. Send your Bitcoin to this address, and you can begin playing online poker. Make sure you check out the poker room’s promotions, especially their welcome bonus. This will give you bonus money and even freeroll entries that you can use to win more money.

Note that some casinos may require that you access a separate site or download software. For example, Bovada casino has an independent poker site from its casino games. Also, make sure that the site you wish to play at accepts players from your country. For example, there are a limited number of sites that accept players from the United States. Fortunately, Americas Cardroom accepts US players.

Once you have made your deposit, then go to the tournaments section of your software. There you will find listings for available poker tournament Bitcoin games. Click on the tournament you wish to play and register. Then just sit back and wait for the tournament to start. With a little luck, you’ll find yourself navigating through the field and making your way to the final table.

Learn how to play poker with Bitcoin

The average Bitcoin tournament can take 2 to 4 hours for a standard structured tournament. Tournaments with long levels and slower structures may take 6 hours or longer. Sit and Go tournaments generally take about an hour to 90 minutes. Poker tournament Bitcoin games last around the same amount of time as fiat games.