Online blackjack enthusiasts are in for a real treat when they wager their bitcoins on the newest Bitcoin blackjack table featured on Bitcasino.io.

Arguably the first of its kind to grace the Bitcoin gambling arena, the new Bitcoin blackjack game boasts high-quality 3D graphics that are designed to provide top-notch experience comparable to that of playing in the exclusive tables in the traditional casino gaming industry.

With its graphics serving as its main selling point, the new game also brings a set of features to the table. Small bets of as low as 1 mBTC are accepted and will accommodate wagers of up to 600 mBTC. Players have the option to place the lowest bet on up to five hands for a single deal because this game supports multiple betting.

Moreover, the 3D Bitcoin blackjack is packed with several options that empower bettors to be in control of certain aspects for the entire game. They can now adjust the speed of the gameplay, the design or style of the cards used, as well as the sounds integrated in the game. 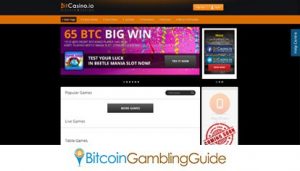 Furthermore, the latest addition to more than 200 HD Bitcoin casino games on Bitcasino.io offers players the option to enable the new Autoplay feature. This allows for the selection of Stop Win and Stop Loss tools. In addition, bettors have the capability to indicate which strategy to use for the duration of the Autoplay feature, as well as edit them to suit their betting styles.

The launching of the new Bitcoin blackjack table is a result of the Bitcoin gambling site’s success in the market, said the Bitcasino.io manager, stating:

“We have experienced extraordinary growth, both in terms of new player registrations and overall turnover, and the feedback on our games has been excellent. That’s why we’re reinvesting as much as we can into new games like Bitcoin Blackjack.”

Nine months since it debuted in the market, Bitcasino.io now has over 50,000 players and has already paid out large sums of Bitcoin. The recent big winning was the 65 BTC jackpot won by the lucky bettor this month.

The manager added, “We are now bringing a mainstream experience to this new and exciting cryptocurrency market.  The rapid adoption of Bitcoin worldwide and the simplicity of processing deposits and withdrawals, has seen a huge influx of players from countries we would have never imagined.”